Brown Shrike and other Autumn finds

One of the guys (Tony Blunden) put up a post on the local What's App group last Saturday evening "Shrike sp report from soapy, mobile and elusive. Does not sound like the red back that was there". Tony had received the news from a well known local birder. Soapy is a common haunt of mine (as it is just across the heath from Windmill) so I went down, the next day, at first light. I walked down the valley and as I got to the last big bush on the right I saw a Shrike on the top of a bush on skyline above me - the stonking black eye-stripe stood out immediately and it had a long thin tail - the bird had gone before I got my camera out. I went up onto the hill (out of the valley) nearly standing on Wryneck on the way but could not find the Shrike. I phoned Tony to tell him there was a Shrike there but I did not get enough on it...he said he was inbound. Just after I called him the Shrike flew across the valley and I saw a uniform pale brown back and tail - again the thin long tail stood out - I was excited!! Tony (and the original finder arrived about 30 minutes later) and then a few more local birders arrived. It took until about 3pm before we were all confident enough to put the news out. Gutted I did not get any shots - and I have been working since, A great bird - my second Brown Shrike on the Lizard (Tony had the 2009 bird).

Other highlights this Autumn have been a couple of Wrynecks (poor shot of one below) and a Tree Pipit - both in Soapy: 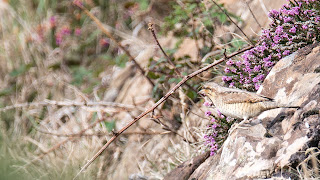 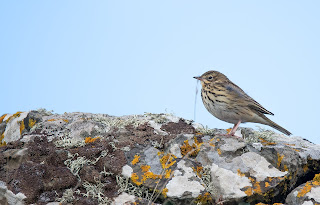 I also had a Buff Breast a couple of weeks ago, for about 15 minutes before it flew off: 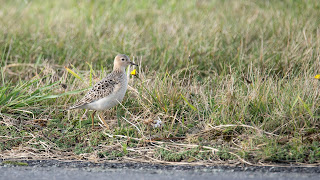 Looking forward to the next few weeks! Happy birding to all.
﻿
﻿
Posted by windmill1 at 22:28